How We Did It: Enterprise-Wide Competency Management 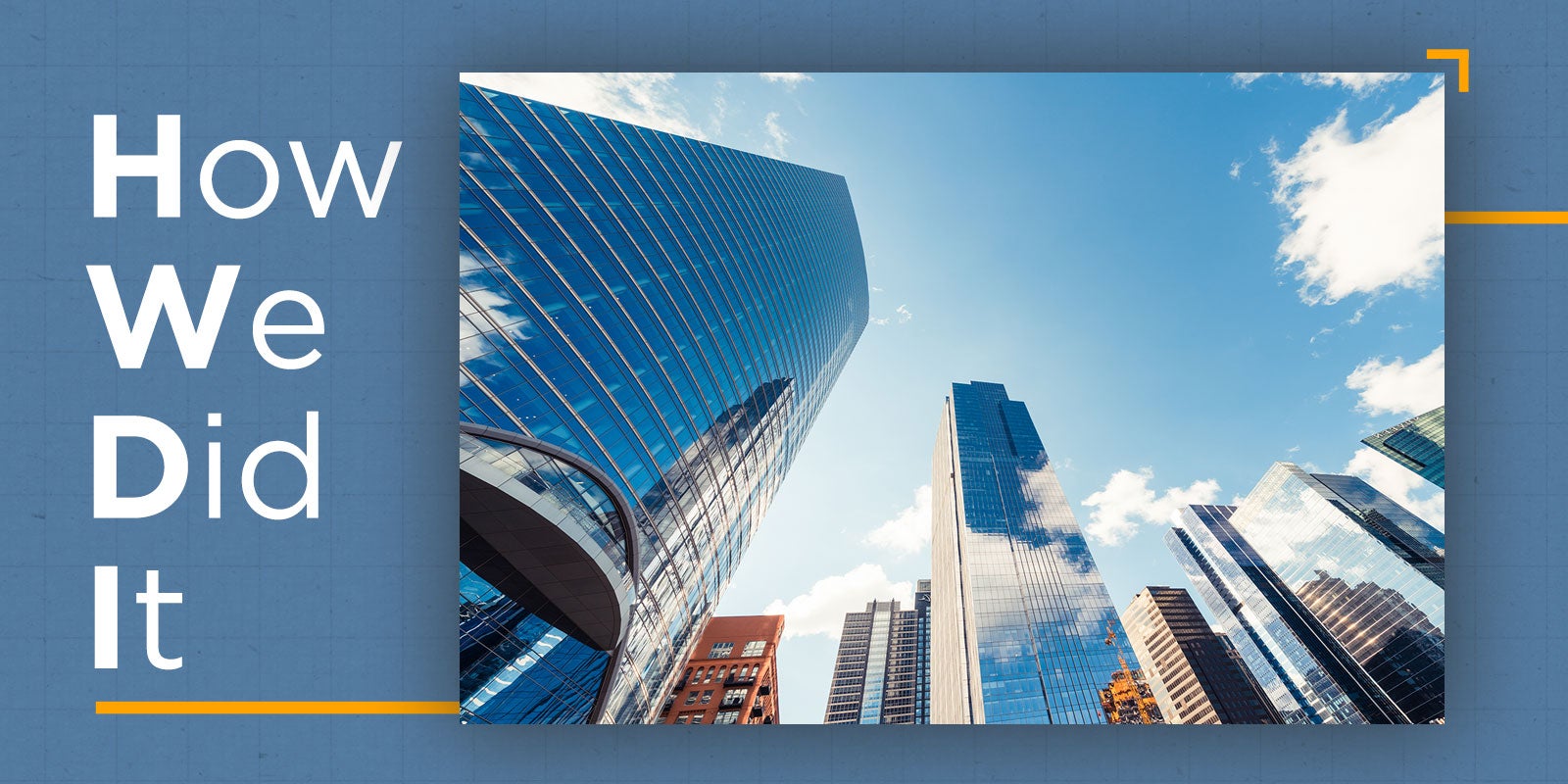 After a large merger, a global organization had several different legacy competency models and needed to move forward with an enterprise-wide model to fit the organization's new structure and culture.

With help from DDI, the company built an enterprise-wide competency model with four leadership levels aligned to the business, using development content and assets aligned to the chosen behaviors.

The refreshed competency model was rolled out globally and became a backdrop for all of the organization's talent management applications, including selection, development, and succession.

We did a lot of work around the content and behaviors, but it is really a partnership to make it stick and positioning the new model in the right way. And this company did a lot of great work in these areas, which made a big difference.

In this How We Did It video, Patrick Connell, consulting manager, shares how DDI worked with one organization to create a global, enterprise-wide, competency management strategy.

The organization was looking to build a new global competency model, post-merger, to fit their new structure and culture. Learn how they partnered with DDI to build out their model, including how alignment with the organization's future strategy and buy-in was achieved.

So tell us a little bit about your client and the challenge that they were facing and why they felt like they needed a global competency model.

Sure. So this was a global client that had just gone through a pretty large merger recently, and there was a big push for obvious reasons to have sort of a one company mentality, right? One company culture, one company set of behaviors, et cetera.

And so they were at this pivotal point of how do we make that happen? And they'd had some existing competency models in place in pockets and in some of the legacy parts of the organization, but obviously, this was a new structure and a new organization. So they had to do something different.

And so they really came to us to say, how can you help us think this through and put something together that is going to be an enterprise focus and can be rolled out globally? So we really rolled up our sleeves with them. It was actually a lot of fun. They had some existing inputs and things that already were in place that they had to make sure were still somewhat visible in the model, but they didn't want to be married or attached to those all that firmly. So it was kind of a sweet spot we had to find there.

We took a look at what they had existing and what we made sure is a visible part of the model. We then really linked very closely to their future business strategy. So they had a very clear direction. The CEO is very clear around how they were going to define the strategy for this new organization and how they were going to communicate it very simply and succinctly, which really helped us because it gave us something to latch on very easily and to align to.

And so we did work and did some interviews at their senior executive level to understand more about the strategy, where they're headed? What are the impacts for what leaders need to do differently in the organization as a result of that, and got very clear on a set of executive competencies at that level. Because that's really going to set the stage for a lot of what's going to cascade down in the organization.

We then worked really closely on what kind of structure was going to be important. So how many levels do they need to have and trying to keep it as simple as possible. And so through a lot of discussions and what we've done with other clients, we landed on four levels, leadership levels. And working to use the competencies that we identified at executive level, how we could cascade those down to mid-level leaders, frontline leaders, et cetera.

And then doing validation work in talking to leaders at lower levels to validate, are these the right behaviors? Are there things that might be missing, et cetera, to make sure again, there's going to be the right level of buy-in. But it was fun work and we had to move quickly as well.

So that's always part of the challenge. So it was also finding the sweet spot with the right number of levels, but also what's the right approach that's going to allow us to get traction here? So, we ended up pulling that together and it's in place now and it's become the backdrop now for all their talent management applications. So including enterprise selection, development, and now I'm also moving into succession. So it was really fun work to do and it was really enjoyed rolling up our sleeves, like I said with them.

So once you had the competency model in place, how did you start to bring that to life? A lot of people have questions around, so they have a competency model, how do you use it? How do you operationalize it? How did that work for this client?

So for this client, they were very attuned to the messaging piece of this, which was wonderful. So, they had a team that were really going to take this forward, once the competency model was built, it was going to roll out the appropriate messaging, enterprise-wide and what are the right methods and modes to do that.

But we worked with them around, what are the key messages? So how do you position this as something that reflects the pivot of where the organization was at that particular point in time, the lift that an enterprise-wide competency model provides, and they were very much, which we agreed, centralizing around this theme about having a common language. So that was a really prominent lens in a lot of the, I'll even say, just internal marketing they did to the organization around the model.

And so we helped inform them around once you have the model in place, what are other assets that are going to be aligned to these, so we help them make the connection around how assessments clearly align to the competencies, in assessing the behaviors. What development content they have that they're licensed, that again, are aligned back to the model.

So they could pull together a really compelling story and that they rolled out in multiple ways through some webinars, also through some standard materials that were provided to the organization, that position the model, but really positioned what's coming next as a result of that competency model. And that was where they really emphasized things like selection and a lot of around development, because they felt like that's where they were going to get a big lift in terms of what the leaders were really looking for in the organization.

So once they socialized those competencies, made it a part of their culture and then started to really target development, as well as assessment decisions around these competencies. What kind of feedback did they get in the organization? How did it ... what were the results?

You know, at its core, it was a change initiative, right? And we all knew that. Very positive feedback at the executive level. And we were very targeted around making sure we've got the right buy-in there. And our client did a lot of good work in socializing of the model there.

But then as it started to roll out, they stayed close to leaders in each level of the organization and the HR business partners as well, that were closely connected. And so overall, very positive. A lot of the organization saw this as a chance again, to pivot and move with the new strategy.

As always expected, there's some people as well who were attached to some of the older behaviors that were more ingrained in certain parts of the organization and our client and we also definitely understood that also. But so there was some work too around something to acknowledge that, showing where some of those behaviors were pulled through into the new model, but then where we were able to really evolve and elevate the behaviors with focusing on some new areas that were more relevant to the business strategy. So, overall pretty positive response. And then some very focused change management work in a few pockets of the organization.

That's an incredible story. It is no easy task to pull together an entire global enterprise-wide competency model and then actually get people to do it and embrace it. So kudos to you, Patrick and Andrew, the team at your client organization, what a huge undertaking.

Yeah, it was, it was, and it can be a big lift, but I think this is where the partnership between us and our clients really, really shines. Because we did do a lot of legwork around providing the content and making sure the right behaviors are there, but it is a partnership in terms of helping to make it stick and working closely beside our clients to make sure that, okay, let's make sure we're talking about this in the right way. We're positioning it. And they did a lot of really good work, which made a big difference. So it was a lot of fun.