How We Did It: Engaging Leaders to Drive a Culture of Safety 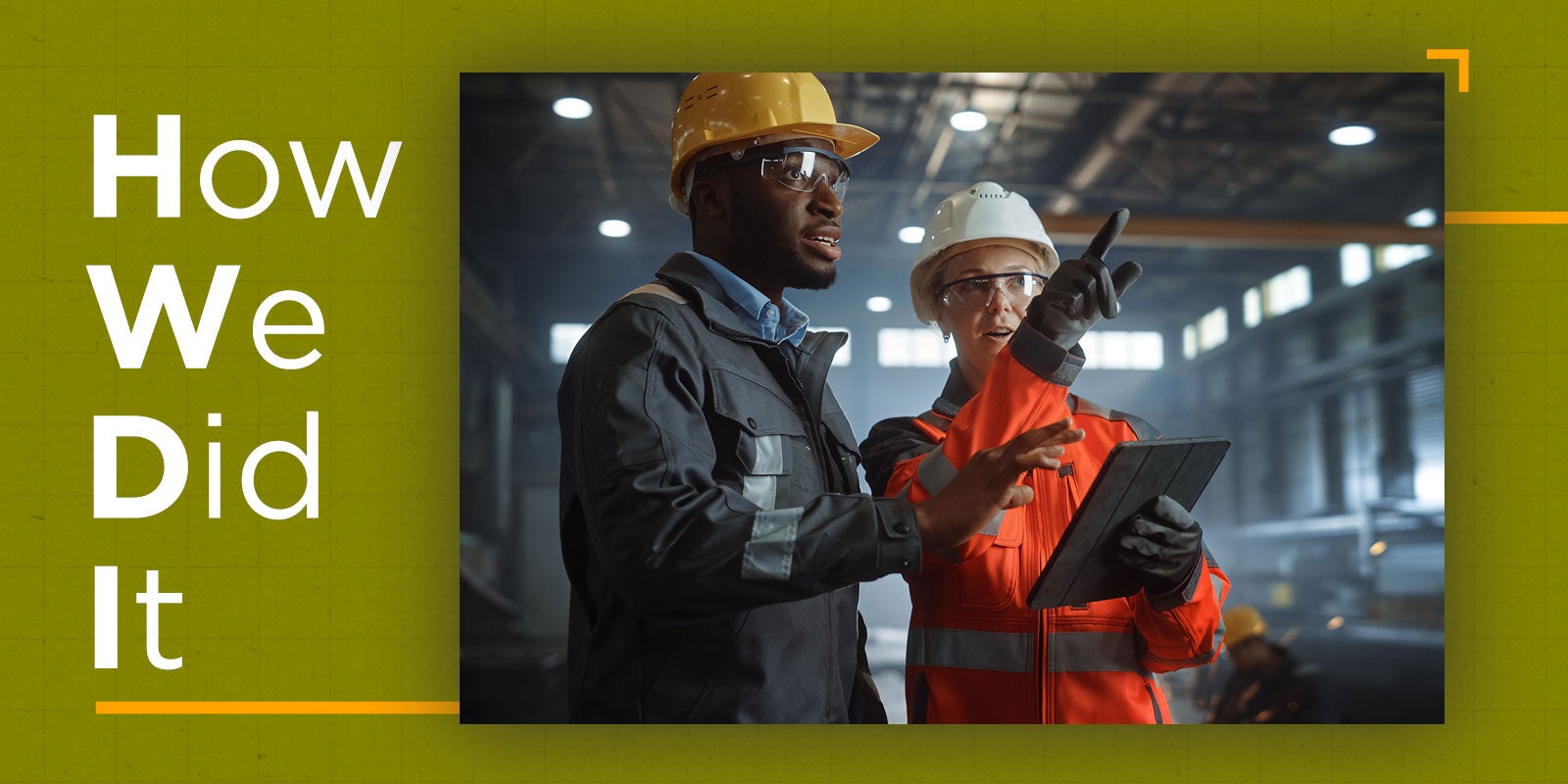 After many acquisitions, one manufacturing company's frontline leadership development strategy was dispersed and inconsistent. They needed one common leadership language to ensure a culture of safety.

The new program has shifted mindsets in the organization, from understanding what it takes to be a safety leader to how leaders can really drive better safety outcomes. The culture has shifted to one where everyone can talk more openly about safety.

It's become a real eye-opener for leaders in terms of learning what it takes to be a great safety leader. But it's not just around having an understanding of the 'whats.' They know how they can be better at driving better safety outcomes.

In this How We Did It video, Katy Freeman and Sara Moorhouse, two consultants in DDI's Europe office, share how they worked with a manufacturing client to build a custom frontline leader learning journey focused on driving a culture of safety.

See how this organization used content from DDI's leadership development subscription to create a blended learning experience tailored to specific skills their frontline leaders needed to drive better safety outcomes. Plus, learn how these geographically dispersed leaders were still able to learn and network together, fully virtually.

Hi everyone and welcome back to How We Did It, where we talk about the incredible work we've been able to do alongside our clients and the results that they have started to see. Today, I have Sara Moorhouse with me and Katy Freeman, and we're going to talk about a great manufacturing company that has been able to drive a culture of safety and engagement by improving their approach to leadership, Sara and Katy, welcome to How We Did It.

Thanks for having us.

Hi Beth, thanks for having us.

So tell me a little bit about the business challenge this company was facing and why they wanted to take a new approach to training their leaders?

This was quite a unique opportunity I think for us to partner with this organization. We were grateful to kind of be working with a newly-formed leadership development team based in Europe. And you could quite clearly see that this group of professionals that we were working with were quite passionate around taking the first steps in their new role in the learning and development space. And they wanted to really make a difference in their first sort of 90 days in starting to develop more of that planned approach to developing leadership capability, something that this organization had never had before.

They're made up of a number of different organizations acquired through many acquisitions so they had quite a dispersed approach when it came to developing leadership, something that they noticed to be inconsistent, and as a result, sort of not really developing that kind of common leadership language.

So the group of professionals that we were working with kind of really wanted to make a difference in crafting this more intentional approach to leadership development. And if I can, I mean, one of the first conversations I remember having, Sara and I had with our stakeholders with the organization is that they said they strongly invest in... They put a heavy emphasis on driving business results, but they really don't invest as strongly in developing their leaders and their leaders really sit at the heart of their organization.

So you could really tell that they wanted to kind of really up their investment in terms of leadership capability to match the investment they were making in business results.

So what solution did we use to work alongside them and how did it work as they started to put the pieces together?

I guess there were a few different solutions that we have implemented here for this particular client. I guess the first one to mention would be the license approach. So this particular client has signed up for a multi-year license where they've got access to our content, and we initially up-scaled their facilitators to facilitate the DDI content, which then, over the years and through their various regions, they'll be able to roll that out in different languages and different countries, and really have people that are embedded in the organization that understand their context and their people and are very close to them rolling out and delivering the training.

So that's one interesting thing to mention. We did, with their frontline leader program, we did do quite a bit of customization, and we did that in partnership with their talent and development team, which was a really great experience for Katy and me to work closely to, I guess, fully understand what their challenges are and then how we could design and tailor the learning journey so that it was very specific to their context and to their situations, making sure that the learning was just incredibly relevant for the learners.

So tell me, as they were going through this learning journey, how much of it was really in-person classroom versus virtual classroom or digital learning, how did that blend play out for them?

So the whole program has happened in the last year and we've done it completely virtually given the circumstances at the moment, they would love to have face-to-face sessions in the future, so when that's available and when the participants are able to travel potentially to other locations, they are looking to have maybe a bit of a blend of some online and some in-person learning.

I think one great advantage of almost being forced to have it virtually this year is just that networking piece. So in our pilot group, we actually had some participants that had probably never crossed paths with each other before. And, as Katy mentioned earlier, the company was maybe a little bit fragmented and siloed and different regions maybe not being as close with other ones.

So I think that this learning journey, while it was really powerful in terms of the leadership skills that they were focusing on, it was also a great networking opportunity for them to meet people of maybe similar roles and facing similar challenges to themselves and having that chance to sort of discuss and learn from each other and share. So I guess one, yeah, piece of feedback that we did hear from participants is that it was a great opportunity to get together and learn in a similar environment.

So they're pulling people together and starting to build this culture among the leaders and connecting them with one another. Specifically, what kind of skills were they focused on as they were looking to drive that engagement and that culture of safety? Where did they put their focus?

Right, so I guess being a frontline leader program, we utilized a lot of our new learner experience modules, so some of the foundational modules like communication, coaching, delegation sort of served as the foundation of our frontline leader program. We then built on that and kind of incorporated some other skills. And as you just mentioned, safety, that was obviously a big focus of the program. So we were weaving elements of safety throughout, and we did do a big focus on sort of not just physical safety, but psychological safety and so topics like trust and courage and resilience came up there as well.

And I guess, one message that we got from the safety director was that people and leaders especially need to, first of all, be role models and lead by example, they also need to have the courage to have challenging conversations, because it's not always easy to talk about safety. So that was another really great topic that we covered. And I guess both with physical and with psychological safety, one important skill that we wanted to focus on was being able to show empathy and support to others. And obviously those two being two of our key principles that kind of kept coming back throughout the program.

These skills that leaders are showing as they start to create this new cohesive culture that's more open and more empathetic so that they can really have some great conversations around things like safety, it sounds like a big shift in mindset for a lot of folks.

How are you starting to see it play out? And what feedback are you getting even though this program is, I understand, in its early stages, what are some of those tidbits you're getting back from folks?

So I think some of the things that we're starting to hear the organization say, and particularly in terms of that mindset shift is getting leaders to kind of really understand that link between safety and leadership. So obviously previously there has been sort of such a strong investment in how to be a great safety leader from a technical perspective, having those critical lifesaving rules in place, all the steps that you have to follow to create a safe working environment, because ultimately this business's mission is to ensure that everybody goes home safe at the end of each work day.

And I think kind of what we've been really starting to hear and leaders were exploring, particularly within their safety module is kind of one of the things that I can really do from an interpersonal perspective, the way in which I interact with my team to kind of cultivate that environment of safety, where people feel that they can actually bring issues to the table and that their managers will be listening to their concerns and kind of taking action.

So I think it sort of sounds like it's becoming a real eye-opener for leaders in terms of the broader scope that they can be a great safety leader. And it's not just around having an understanding of the what's I guess from a safety perspective, but really how we can be better at driving better safety outcomes.

Yeah, I think that's great. So it's in their culture, they're starting to take those steps towards mindsets and shifts where people can talk about safety, bring their problems to the forefront and prevent so many issues and accidents before they even happen.

Thank you so much for sharing this great story. And I can't wait to hear more about how they continue to progress on this path to safety and better engagement. Thank you, Katy and Sara.